In the fifth book in the Hitchhiker’s Guide to the Galaxy series,  Douglas Adams described the universe as being “a lot more complicated than you might think, even if you start from a position of thinking it’s pretty damn complicated in the first place“. Ecological interactions between species was probably the furtherest thing from his mind. However, when ecologists start diving into the wormhole of interactions in the natural world and its complexity, it really is pretty damn complicated.

I was reminded of this when reading a recently published paper “Responding positively to plant defences, a candidate key trait for invasion success in the New Zealand grass grub Costelytra zealandica” from researchers at Lincoln Universities Bio-protection Research Centre.

For millions of years plants and the herbivorous insects that consume them have been quietly battling each other for their own self interests and to increase their chances of survival. Plants have evolved an array of different strategies, including chemical warfare, to help save their bits from becoming the entrails of their enemies. Insects have co-evolved with the chemical defensive strategies of plants and commonly counter attack through avoiding or suppressing a particular toxin. The pasture species white clover and its attacker grass grub are no exception. They too have developed different ways in which they can defend themselves and succeed in battle and when it comes to the battling each other, things get a little more complicated.

Grass grub is an endemic scarab beetle in New Zealand that has had a huge amount of success in exploiting exotic plant species, particularly white clover, as a source of food. This success has led to their transition from sideline players to pesky invaders in their native range. Somehow, without years of coexisting and evolving together, grass grub has managed to overcome white clovers defences and has successfully exploited it causing severe economic damage to productive pastures.

A call from Carey and colleagues. urging scientists to find out why some endemic species turn into invaders within their native range led researchers at the Bio-protection Research Centre to investigate why one of our own endemic species, grass grub, has done exactly that. It was theorised that grass grub had taken on a different function using existing processes suited to its environment to also counter chemical defences, aka secondary metabolites,  of introduced hosts, which would explain why they were particularly interested in their main exotic host, white clover. 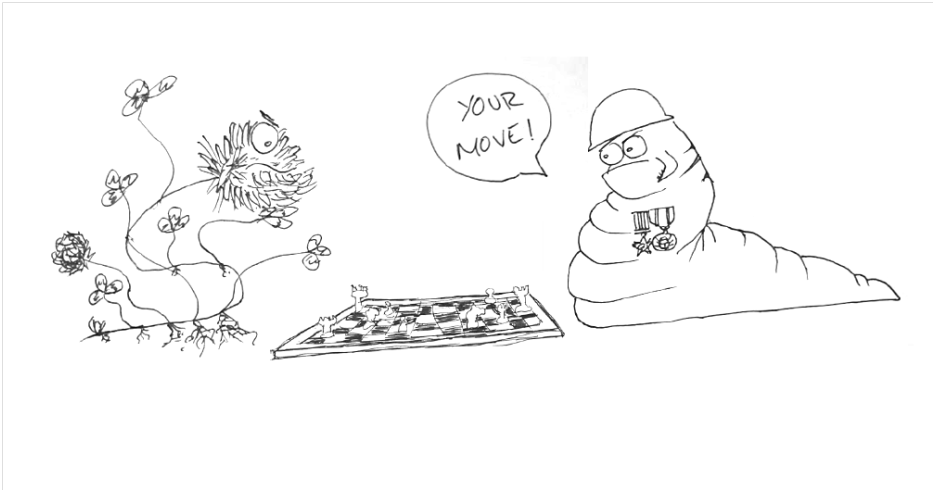 It is clear from this experiment that the invasive grass grub could tolerate the defensive chemicals released by white clover as they continued to feed happily on the treated roots. But were these chemicals actually used by the larvae to help with their improved performance? As the great Sun Tzu wrote in The Art of War “the opportunity in defeating the enemy is provided by the enemy himself”. And it seems that this has indeed happened here. The plant defence compounds could be used by an insects metabolism to increase their overall condition. This is not the first paper suggesting that insects could exploit these compounds. In the early 1990’s Kearsley and Whitham also acknowledge that some insect herbivores thrive on the defensive compounds released by plants.

It would be interesting to use molecular approaches to understand exactly what pathways and chemicals are involved in positive responses to plant defence compounds. Trying to understand the chemical signalling pathways in plants and their changes in response to something such as herbivory is incredibly complicated as these responses are sensitive and can be triggered by wounding and cross-talk.

Using a plants defence system to better ones self may be a key trait for invasion success of grass grub in New Zealand. But no matter how grass grub has managed to overcome its exotic white clover host, ultimately it appears that it has won the battle. For now.

The author Lisa Watkins is a postgraduate student at Lincoln University. She wrote this article as part of her assessment for ECOL 608 Research Methods in Ecology.