In recent years the Marlborough region of New Zealand has found international recognition amongst wine critics for the quality and uniqueness of its Sauvignon Blanc wines. New Zealand has been quick to capitalise on the positive press, and now Marlborough Sauvignon Blanc constitutes more than 80% of New Zealand’s wine exports to the rest of world. This is great for the local economy (and our winemakers’ pride!), but is there really something special about these Marlborough wines, or are they just the fleeting fancy of a fickle wine press?

To find out, researchers James Green (University of Otago), Wendy Parr, Jason Breitmeyer, Robert Sherlock (Lincoln University) and Dominique Valentin (INRA agricultural research centre, France) arranged a blind tasting of six Sauvignon Blanc wines from Marlborough alongside six from central France and six from southern Austria. A panel of 19 wine professionals were served the wines in random order without being told anything about the grape variety or origin. They weren’t even allowed to see them – the wines were served in black wine glasses to make sure differences in colour wouldn’t influence their palettes. Each participant was given two tasks – the first was to describe each wine’s aroma and taste from a list of taste descriptors, such as “tropical”, “green capsicum”, “grassy”, etc. The second task was to use these impressions to group together wines they thought tasted most similar. The researchers took these 19 individual opinions and merged them using a statistical technique called multidimensional scaling to show similarities in graphical form, allowed them to find clusters of wines which are statistically the most similar. The results were clear: with the exception of one Austrian wine which was placed in the New Zealand group, the wines were placed in three clusters neatly arranged by region. This tells us that the tasting panel were able to group almost all the wines by region, based on taste alone. It would seem that individual regions really do produce wines with individual tastes! 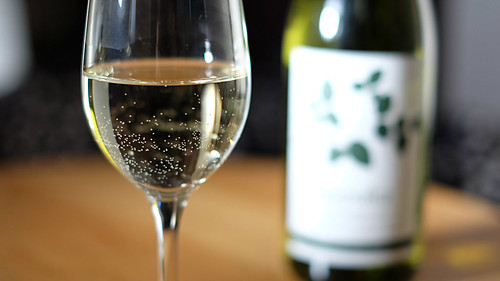 The researchers then went one step further and investigated the actual chemicals responsible for these wines’ individuality. To do this they used a tiny sponge-like probe to capture a snapshot of the volatile compounds just above the surface of each wine sample. These compounds were then released into a gas chromatograph, where they have to traverse a long, maze-like tube – a microscopic labyrinth. Molecules which are light and slippery get through the maze quickly, whilst molecules which are heavy or tend to stick to the walls of the tube take much longer to get through. In this way the hundreds of different chemicals in the original snapshot reach the end of the maze one at a time, where they are identified and measured individually to build up a chemical signature of the wine’s aroma.

A statistical technique called partial least squares regression was used to link patterns in these wine chemical signatures to patterns in the wine descriptions offered earlier by the tasting panel. The result was a set of correlations between wine, region, flavour and chemical composition. The Marlborough wines were found to be most closely associated with gooseberry, boxwood, green capsicum, herbaceous and grassy flavour descriptors, which is a good match with the terms used by wine critics to describe Marlborough Sauvignon Blanc. On a molecular level, there were 3 individual chemicals strongly associated with the Marlborough wines (for the chemistry boffins out there they are hexyl acetate, trans-3-hexan-1-ol and 3-mercaptohexyl acetate (3MHA)). Knowing which chemicals are responsible for these highly prized flavours means wines can be quickly and accurately analysed to look at the effects of winemaking and vineyard practices, which in turn helps our winemakers bring out the best from their grapes.

This study demonstrated that New Zealand Sauvignon Blanc wines are distinctive enough to be picked out by taste alone – they really are unique! This uniqueness is also reflected in the molecular composition of the wines, where modern analytical and statistical techniques are being used to uncover the chemical secrets behind the world’s favourite Sauvignon Blanc.

The original article was published in Food Research International.

The author is a postgraduate student at Lincoln University. He wrote this article as part of his assessment for ECOL 608 Research Methods in Ecology.