There is only one species of katipo in New Zealand 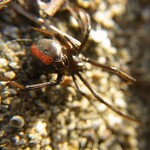 Photo of katipo by Jon Sullivan

About the katipo
The katipo spider (Latrodectus katipo) is a small spider, their abdomens are about the size of one of your fingernails. They are black and often have a pretty red stripe down their back,   hence their Australian cousins are called “Red Backs”. In the North Island there is a form of katipo that has no red stripe. These are also called katipo, however, not so long ago they were considered a different species. This article reviews a paper from when the North Island katipo were called L. atritus and how the authors of this article: James Griffiths, Adrian Paterson and Cor Vink soon came to realise that they could indeed be the same species as the katipo.Katipo spiders usually live in grasses, sedge, driftwood and flotsam on sandy beaches throughout New Zealand. The black form of katipo has only been found in the northern half of the North Island, whereas the red striped katipo can be found anywhere south of that with the furthest south being found on the coast of Otago. Read here for more info. 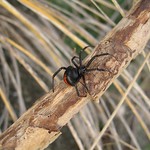 Photo of katipo by Jon Sullivan

In 2005, James Griffiths, Adrian Paterson and Cor Vink from Lincoln University published a study about New Zealand’s two Latrodectus widow spider species. They used DNA to determine how closely related the two types of katipo are and how close they are related to their Australian Cousin; the red back spider (L. hasselti and L. hesperus). In 2008 a paper was published officially noting that the two species of katipo were actually one species with colour variation. However, the 2005 paper had already begun to determine that the two species were actually one. There was already debate about the two types being one species, however in 1995, Forster elevated L. atritus to be a species of its own based purely on the different colouration. Colours often vary within a species and Forster offered no other justification.

Griffiths and colleagues used DNA to conduct pairwise tests and studied the morphology of the spiders to determine that it was very unlikely that the two types of spiders were actually separate species. Although the less colourful katipo is only found in the northern half of the North Island, the two spiders live in exactly the same type of habitat, are identical in morphology except the colouring and the two spiders; L. katipo and L. atritus have low interspecific pairwise distances (in other words the DNA shows they were VERY similar).

Summary (Photo of Australian red back spider by Sunphlo) 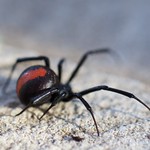 Photo of Australian red back spider by Sunphlo

The main points I am trying to stress in this post is that even though L. atritus was only officially recognised as being L. katipo in 2008, earlier papers published years beforehand (including the one above) had already begun to show that the two species was likely to be one, and that L. atritus was promoted to a species despite the limited amount of evidence.So despite the less colourful katipo only being found in the northern part of New Zealand and there being large differences in colours, the two spiders are actually one species, Latrodectus katipo, and this paper by  Griffiths and colleagues were some of the first people to find and publish evidence to support this.If you are interested in reading the whole article by Griffiths, and colleagues you can find it here.  Be warned it has a lot of technical molecular explanations in it.

If you are interested in our New Zealand katipo you can also read this article, and if you want to know more about the katipo’s Australian cousin you can read this. They can also be found in New Zealand! The katipo and red back spiders also have a cousin in North America too if your really interested, it’s called the black widow. And lets not forget the look-alikes, in New Zealand there is the black cobweb spider too, also known as the false katipo.

The author Chris Efford is a postgraduate student at Lincoln University. He wrote this article as part of his assessment for ECOL 608 Research Methods in Ecology.