Who is ready to move? Indicators of when Pycroft petrels are ready for translocation.

Gadfly petrels (Pterodroma species) are amazingly adapted to life at sea, having evolved almost alien-like traits. Spirally twisted upper intestines aid in the digestion of marine organisms. Glands located above the eyes remove excess salt from the bloodstream which is drained from tubular nostrils. The petrel’s keen sense of smell isn’t attributed to these tube noses. Large olfactory bulbs occupy 1/3 their brain volume allowing them to sniff out their nesting burrows at night.

Mysterious in nature, only recently have scientists been able to study oceanic flight patterns during their 5+ months at sea. Whilst the birds are on land, their breeding and nesting behaviours are fervently studied. Individuals return to the same nesting site each year to reunite with their mate and rear a single chick. Before laying eggs, partners go on an exodus to gorge on food, some traveling 3000 km from their breeding site. Afterwards, both mates share in egg incubation and all chick rearing tasks. That is, until they completely abandon their chick which soon after embarks on its first stint at sea, which may last several years.

Smaller bodied Pterodroma species, like Pterodroma pycrofti, the Pycroft’s Petrel, nest in burrows or crevices, typically on islands. Natally philopatric (returning to same place to breed), chicks imprint to their nesting site sometime around their first nest emergence. Unfortunately, the introduction of non-native mammals, such as rats, cats and stoats, has left these ground nesting birds vulnerable to depredation. In conjunction with habitat loss, depredation has contributed to the loss of many populations and some two dozen species of Pterodroma are now classified by the IUCN as vulnerable to extinction.

Moving seabirds to offshore islands may be their best hope of survival. Image by Adrian Paterson.

How then do we move forward conserving these seabirds whose fascinating biology leaves them susceptible to present-day threats? The eradication of mammals is a massive undertaking requiring immense resources and is only feasible in areas where the influx of new mammals can be prevented, such as offshore islands. Predator-proof fences have also been successful in keeping out predators thereby creating sanctuaries for susceptible species. These safe havens are prime places to establish new breeding sites for philopatric seabirds. For translocation efforts to be successful, it is not only imperative that chicks are robust enough to endure the move, but also that chicks are moved before they imprint to their original nesting site.

The research of Benoit Gangloff and Kerry-Jayne Wilson (2004) at Lincoln University evaluated feeding frequency, meal size and chick growth of the endangered Pycroft’s petrel (Pterodroma pycrofti). The aim of the study was to identify the optimal age for translocation and identify which morphological traits are the best indicators of a chick’s age. The study took place during the nesting season (January-March) on Red Mercury Island, a volcanic island off of Coromandel Peninsula of New Zealand’s North Island. Initially, 80 recently hatched Pycroft’s petrel chicks were selected as study subjects and data collection terminated in late-March when many of the chicks had fledged.

Chicks were weighed at least every second day to determine if the chick had been fed the night before. On three occasions a subset of chicks (known to have been fed) were weighed at 3-hour intervals to determine how large a meal they had received the night before. To assess developmental traits, measurements of the bill, tarsus, tail and wing were taken once a week early in the season. As the chicks neared fledgling age (when they can fly themselves), it was assumed growth would become more rapid and thus morphological measurements were taken more frequently. Toothpicks were erected in front of the burrow and disturbance indicated the nest was visited by an adult. As the chick neared fledgling age, night-time observations of nest emergence documented imprinting events.

The study showed that Pycroft’s petrels should not be moved before they reach maximum weight (26 DBF – days before fledging) yet should be moved prior to first nest emergence, no later than 10 DBF. The suggested age for translocation is 20-10 DBF. Chick age can be inferred by weight and wing length; optimal ranges are within 218-250g and 149-184mm respectively. As chicks require supplemental feeding after translocation, this intensive study of the Pycroft’s petrel provides guidance on chick selection to minimize feeding events.

Translocation is a massive undertaking that requires extensive planning and mitigation of potential hazards to ensure the success of the chicks. With an increase in the establishment of predator-free sanctuaries translocation is a viable conservation strategy by creating new nesting colonies. Recent translocations of Pterodroma species have taken place (Kilauea Point, HI; Motuoroa, NZ) and more are in the planning stages (Department of Conservation). Species-specific studies, such as the research by Benoit and Kerry-Jayne, are crucial for the development of chick selection and aging criteria. And these criteria are important for successful translocation of gadfly petrels. When success is marked by the survival of individual birds, establishment of a protected nesting colony, and ultimately the preservation of a species, no factor should be overlooked. However, it is perpetuity of newly established nesting colonies and ultimately the perpetuity of the species that will be the true indicator of success. 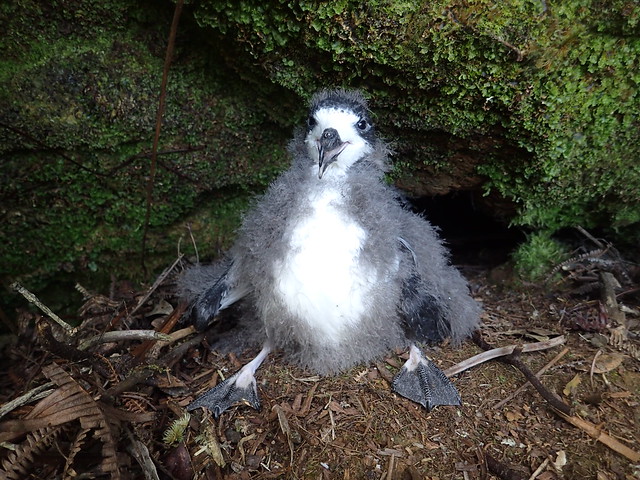 The author Meagan Selvig is a postgraduate student in the Master of International Nature Conservation taught jointly at Lincoln University and University of Göttingen. She wrote this article as part of her assessment for ECOL 608 Research Methods in Ecology.

Blog article was inspired by and summarizes the research conducted by Benoit Gangloff and Kerry Jane Wilson (2004).